6 replies to this topic

I'm Ryno from Pretoria, South Africa and this is my Sera.

I've wanted a Sera since I found out it existed. Unfortunately, they're as rare as hen's teeth over here. And when you do find one, it's either registered in a neighbouring country such as Zimbabwe, where they can legally be imported or they're in a pitiful condition, or both.

I got my first taste of the Sera when I test drove two in one day back in 2012. The first one was green, manual and registered in Botswana, so unfortunately a no go. The windscreen was cracked and the interior looked like it flooded and nobody bothered to clean it up.

The second one was a gray manual and registered in SA. But that was the only good news. The windscreen was also cracked, and if the previous one's interior looked like it was flooded, this one looked like it was in a mud slide. It was down on power, the brakes could only be described as scary, and I'm positive a lion chewed on the wing mirrors. There was a small dent just in front of the bonnet badge and at the rear rust was visible through a crack in the body filler. On any other continent this would be a write-off, but this is Africa. I saw the same gray Sera for sale 3 years later and went to test drive it again. The interior had been re-upholstered and the exterior was poorly resprayed in dark orange. The engine still lacked power and the brakes scared me even more. The windscreen was still cracked and the tyres were bald. O yes, and it had one of those sound systems where a screen pops up and you can watch DVDs. Priorities, right? I saw it for sale again 2 months ago. It now has 17" wheels and a cone air filter. It was advertised for the same amount I paid for mine. The windscreen is still cracked. 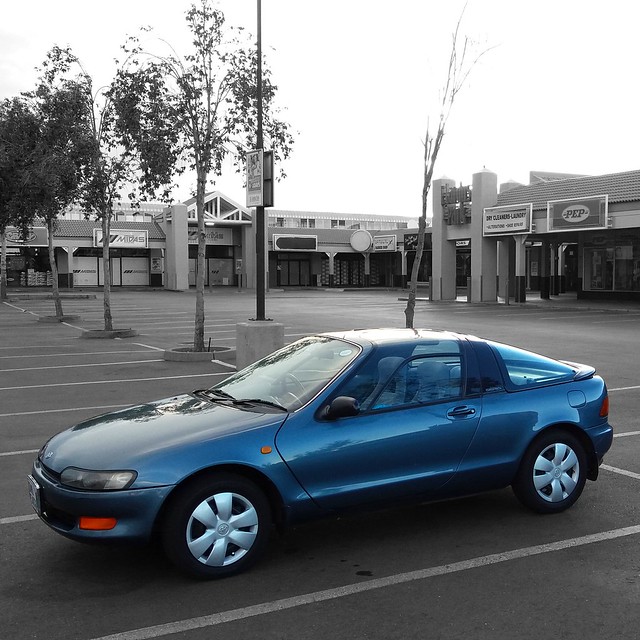 Mine is definitely not perfect, but compared to the previous one's I've driven, it was in a different league. As far as I know, it was imported directly from Japan long ago, when it was still possible. The previous owner sourced a few missing original parts from Australia, such as the steering wheel and roof panels. He also replaced the door shocks with DeLorean shocks imported from DMC in Texas. When I bought it, it had 17" after-market wheels, but the ride was horrible, so I replaced it with 14" steel wheels and Toyota Yaris wheel trims. Not only does it ride a lot better, but they weigh about 22kg less.

The paint is starting to show it's age. There are scratches and small dents everywhere and the clear coat is starting to crack a bit around the left rear panel.  But a respray would be too expensive, so I'll just stand further away when looking at it :-)

I don't have any plans to modify it, as I prefer my cars stock, but there are a few things that need attention. But that can wait for another post. 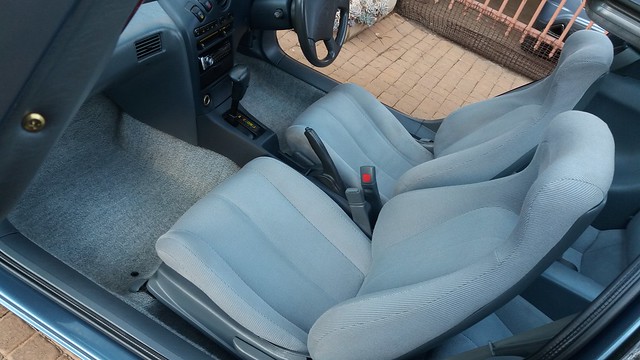 Was this Lionel Gaums' car?

Not sure if there are any other South Africans on the forum? I know of at least about 10 Seras that I've spotted or seen for sale in SA over the years.

There are a few cars listed on the world map in South Africa. I see you have already added your car.

Wow never seen one in that blue colour very clean!

Very nice looking Sera. Love the color. Also the Yaris rims actually look ok on a Sera, a rather bold design without the "tuner" look. So many people try to dress up an already outstanding car design with after-market items that take away the "water-drop" beauty of the Sera. Seventeen inch rims are ridiculous!  Stock is good.

New door and hatch (boot) struts are great (thank you James!). It's a fun and easy car to work on. It's a car without all the bells and whistles and whizz-bang gadgetry on today's cars. Dihedral doors do all the eye-candy work needed. Simple is good.

One thing we did that really helped was tinting the windows. Dresses up the car nicely (pulls it together), keeps out most of the UV and offers a good measure of privacy. We get a lot of compliments and questions about our Sera. One persistent question we get (that most Sera owners never get) is "how difficult is it to drive with the steering wheel on the wrong side of the car?"

All but a few Yankee Doodles don't do RHD or have ever seen one.

Back to My Project Car

Reply to this topic

0 user(s) are reading this topic